Is Internet-Age Fundraising a Threat or an Opportunity? 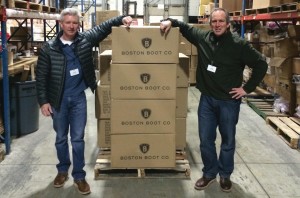 When Joe Lyons and Joe Prew decided they wanted to go into business together on a venture they called Boston Boot Co., they knew they would need capital. Rather than apply for a traditional bank loan or make their pitch to a venture capitalist or angel investor, they turned to the crowd, specifically Kickstarter. They walked away with $250,000 – 10 times what they asked for.

Their tale, along with questions and concerns about crowdfunding, dominated a breakout discussion at a recent Small Business Administration event in Cambridge, Mass., hosted in honor of National Small Business Week. While options like angels and venture capital were also part of the discussion about finding capital for a business, the audience was most captivated by the Boston Boot Company’s story of raising $250,000 from prospective customers.

Kickstarter is an online service where an artist or entrepreneur makes a video pitch to potential backers and promises rewards for various degrees of donation. A $50 donation to back a craft brewery, for instance, might net you a free T-shirt and your name on the wall.

That might sound like small potatoes, but the service has grown quickly, funneling millions of dollars to video game headsets, comic books, footwear and independent films. Earlier this year, Kickstarter boasted that it surpassed $1 billion in pledges from more than 5 million donors.

Rewards- and charity-based services like Kickstarter are the most common among all types of crowdfunding, but it’s worth also mentioning lending-based and equity-based crowdfunding, which individuals or small businesses can use to borrow loans or raise capital, respectively.

Opinions are mixed as to whether crowdfunding could crowd out traditional bank lending, or ultimately complement it by giving more small businesses a chance to launch in the first place.

A report released in the second quarter of last year by global firm BBVA Research argued that “lending and equity-based crowdfunding are disruptive technologies for the banking industry with the potential to displace banks as the primary source of funding for personal and small business loans.”

The report cited data from the consulting firm Massolution showing that $2.7 billion was raised worldwide in 2012, with just over half of that money coming from donation- or rewards-based sites, and 59 percent of those funds raised in North America.

Banks should take heed of crowdfunding because it could pose a real threat to their core business, the report’s authors say, adding that banks should invest resources in these disruptive models so they can better understand the needs of markets they haven’t been able to serve.

Chris Gaginis, director of congressional relations for the Consumer Bankers Association, suggested something similar. He gave the example of a small business that needs some short-term liquidity faster than the bank can provide. That customer can turn to a crowdfunding site to close the gap faster and meet payroll.

It’s not dissimilar to the partnership between BBVA Compass, a $65 billion commercial bank headquartered in Alabama, and On Deck, an online lending platform that uses a proprietary data analysis system to judge credit worthiness and make small business loans with investor dollars, Gaginis said.

“If you’re a bank and you can partner up with somebody like that, you have a faster deployment of capital and you can meet the needs of your small business customer in a new way that’s innovative and a little more efficient,” he said. “I think you’ll see more of these [partnerships] pop up as banks look for more efficient ways of deploying capital to those small business customers.”

Others think crowdfunding platforms may complement traditional bank lending in a less direct way, in effect launching a business into bankability.

“They should certainly be paying attention to it, but I don’t see it as being an either-or scenario,” said Scott Goodwin, a member of Wolf & Co. and leader of the firm’s technology practice. “Banking early-stage tech companies has never been the sweet spot for small business lenders.”

Boston Boot’s Lyons likened his Kickstarter campaign to a pre-qualification of sorts. A successful crowdfunding campaign can demonstrate demand for a particular product or service, as well as that company’s ability to build a following.

“I think they’re more compatible than they are competitive,” Goodwin said. “I think Kickstarter can get a company to a place where they might be more traditionally bankable when they’ve got a product, a revenue stream and customer relationships.”

Laura Alix is a staff writer for The Warren Group.